Here are some useful tips and advice to improve your road safety and learn about how to drive safely when sharing the road with cyclists, particularly during busier periods.

There may be more cyclists than usual due to recent changes in travel behaviour, especially at peak times of day and during rush hour traffic. This is when most collisions occur. And this is no surprise. Traffic is increased during this time and you may be hurrying to get to or from work. However, it’s important that you give cyclists space and time as rushing and potentially causing a collision is just not worth the risk.

It’s often difficult to see cyclists, especially when they are coming up from behind, coming out of junctions, at roundabouts, overtaking you or filtering through traffic. Be aware that cyclists could filter either side of you in stationary or slow-moving traffic.

Always look out for them before you emerge from a junction; they could be approaching faster than you think. When turning right across a line of slow-moving or stationary traffic, look out for cyclists on the inside of the traffic you are crossing. Be especially careful when turning, and when changing direction or lane. Be sure to check mirrors and blind spots carefully.

3. Give space when overtaking

Overtake a cyclist in the same way you would another vehicle. Plan ahead and wait until the opposite carriageway is clear. 1.5m is a minimum safe passing distance when overtaking cyclists at 30mph. Allow more space at higher speeds. If you cannot allow the minimum distance, do not overtake until you can.

If a cyclist looks over their shoulder while you are following them it could mean that they may soon attempt to turn right. Give them space and time to do so.

Do not overtake near a junction, pedestrian crossing, on a roundabout or at pinch points (for example, keep left bollards). Never overtake just before a left turn you plan to make. Do not drive close behind cyclists or sound your horn.

Read more advice on overtaking a cyclist in the Highway Code.

Cycling feels hazardous when drivers are too close, so give cyclists space and be patient. Expect cyclists to move out in the road to avoid potholes, drains etc. or to be seen at junctions. Even if there is a cycle path or cycle lane, there may be reasons for cyclists to be on another part of the road – such as to make a turn or to make themselves visible.

Always look for cyclists, especially at junctions. Make eye contact where possible to show you have seen them. Always check your mirrors and blind spot for cyclists, whether you are stationary or moving. Legally, a cyclist can use the entire lane and will often take a mid-lane position to deter overtaking by vehicles at particularly vulnerable locations – for example where the road narrows, at junctions, and on blind bends.

Cyclists may not always give a signal, especially mid-junction or on a roundabout, as they need both hands for steering and braking. If you are unsure of a cyclist’s intention, wait for them to make their manoeuvre. Use your indicators to signal your intentions and look out for their signals.

Always check for cyclists by looking over your shoulder before opening your car door.

Look out for cyclists at roundabouts and give them plenty of room. Cyclists may stay in the left-hand lane and signal right if they intend to continue round the roundabout. Allow them to do so.

Brushing up on your road safety knowledge can help keep you and other road users safe. Get tips delivered straight to your inbox!

Your data will never be shared and you can opt-out of these emails at any time. For more information please see our privacy statement. 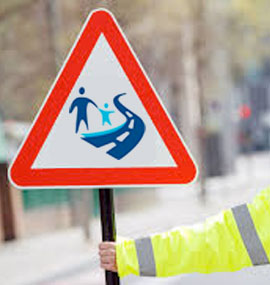